The rain intermittently pelted the bus as we veered around turn after turn on the climb from Pereira to Manizales.  The gloomy, overcast sky was determined to block any sunlight from flitting its way through to the land below.  Regardless, the dark green color of that land was still vibrant, displaying the fertility that makes the Eje Cafetero, Coffee Axis, of Colombia so special.  Along the tops of the mountainsides, one could catch glimpses of the meticulous work that went into organizing each of the coffee plots.  Continuing around another one of the bends, I was able to make out Manizales.  As the bus entered into the city, the rain had subsided, leaving a slight chill in the air. At the bus terminal my friend picked me up and we headed out for lunch.  The restaurant, Tierra Viva, was next to a thermal pool heated by the volcano Nevado del Ruiz.  As guests waded in the pool, a wave of envy came over me knowing that we didn’t have our swimsuits to join them.  Heading into the restaurant, we chose the Patacón con Hogao and the Picada.  The Patacón con Hogao is two large sheets of fried plantains with a delicious tomato, onion, and garlic salsa.  The Picada is a filling grouping of chorizo, steak, chicharrón, yuca, plantains, and french fries.

After lunch we headed to the gothic-style Cathedral Metropolitan Basilica of Our Lady of the Rosary.  Walking along the street to the cathedral, the views were stunning.  It looked as if the city after a couple of blocks suddenly disappeared into the valley below.  At the cathedral we paid for the entrance to go on the tour taking you to the top.  As we walked up a service was in progress below, providing a liturgical soundscape to the cathedral’s visual wonders. 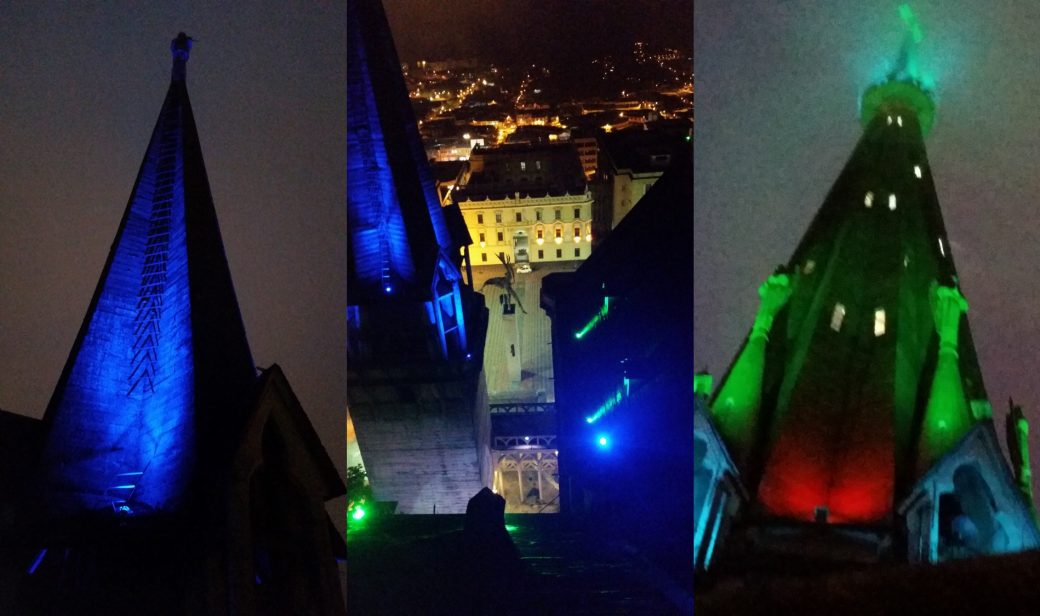 Reentering the cathedral, we saw a modern, winding stairwell ascending narrower and narrower to the cathedral’s highest spire.  Splitting into two groups so as not to overcrowd the observation deck, we took turns heading to the top.  Upon completing the modern stairwell, the tour guide motioned to the original stone staircase noting that we still had further to go.  With light sparse, I used my cellphone’s lantern to help guide our way up.  I also had to be mindful of the low ceiling.  Reaching the top was well worth it.  The city’s lights sprawled across below us in all directions, piercing through the mist.  After taking photos, we began our descent cautiously.  Once outside of the cathedral, we walked around to the Plaza de Bolivar to take in one last view of Manizales’ lit up centerpiece. 2 thoughts on “Manizales: A Gem in the Andes”